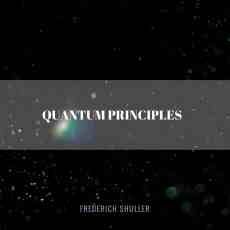 1 Entropy 6:39
2 Plasma 5:42
3 Obstinate Electrons 16:31
4 Pulsating Ions 9:52
Kontinuum Productions (DDL 38:45) ****
(Minimalist and hypnotic New Berlin School)
More and more, I have this feeling that we quietly assist to an emergence of EM, the Berlin School and/or the psybient styles, in Romania. A little as with Poland, but some 10 years later, the land of Indra abounds now of some rather interesting artists who explore and push back the limits of a genre which amazes constantly due to its infinite possibilities. Frederich Shuller is a French artist of German-Rumanian origin who is also a good friend of Mihail Adrian Simion, aka Alba Ecstasy, and who is influenced by artists who have roamed over the territories of progressive EM such as Klaus Schulze and Tangerine Dream. Inspired and encouraged by his good friend, Frederich Shuller signed a first album in the autumn of 2014, The Untitled Album. Strong of a first successful contact among the critics and of a good reaction from the Romanian public, Shuller delivers 6 albums, all of an average of 40 minutes, which have found niche on the download site of Kontinuum Productions. “Quantum Principles” is his last one and unveils a pleasant world of minimalist structures built upon some great movements of crystal clear tones sequences.
The notes which fall and flutter in winds without sounds remind me at once big flakes of sonic snow. It’s with these charms that “Entropy” will caress your ears. Percussions which click such as carbon monoxide emissions bribe the virginity of the tones which are so crystal clear. Other more solid percussions, like a good rock dipped into the lightness of the 80’s, sculpt a steady rhythm where crash the sounds of cymbals. Lines of synth fly lightly as the first snowy keys, deepening the fields of the charms of “Entropy” which becomes a real labyrinth of rhythms and harmonies with its minimalist structure which adorns itself constantly with new elements. It’s a rather attractive stylistic composition where are grafted a line of 7 spasmodic sequences, percussions without directions and rivulets of sequences which bone their carcasses. The synth and the keyboard are not outdone. The harmonies flow into different shapes and tones while the solos whistle in loops as “Entropy” approaches its 4 minutes. And there are other sequences… Very appealing, “Entropy” leaves its imprints and introduces even the very nervous structure of “Obstinate Electrons” with ions which skip in the shape of minimalist jerks on a long structure decorated with a beautiful line of a vampiric bass and with lush layers. The synth sheds its tears while the percussions solidify a steady rhythm which is nibbled by evanescent lines of rather discreet sequences here. Here are two great striking structures which wrap the somber interstellar journey without rhythms, but with many atmospheres, of “Plasma“. If plasma would have of the sound, it could possibly give that. “Pulsating Ions” stuffs itself a bit of these atmospheres but proposes a mute rhythm with a troop of pulsations and percussions which weave an ambient and muddled structure of rhythm. Thin lines of sequences filled with organic tones come and leave, such as amorphous bees which try to take away the juice of a huge flower. That gives the effect of a kind of ambient Dub where are drumming sequences, pulsations and percussions in a cosmos filled with huge worms which come little by little to gnaw its structure.
A minimalist EM where every bend grows rich of new elements as attractive as unexpected, “Quantum Principles” is a small pleasure which finds all of its nobility the ears wrapped well in a good set of headphones. The wealth of the sound and the complexity of the intertwining structures of rhythms, or layers of atmospheres, arouse constantly the curiosity of the ears which are in search of a sound aestheticism, the colors of sequences are absolutely enjoyable here, and of a complexity on which one becomes accustomed quite rather easily. This is a really nice album which deserves that we explore a little more the universe of Frederich Shuller.
Sylvain Lupari (January 8th, 2016)
gutsofdarkness.com & synthsequences.blogspot.ca
You will find this album on the Kontinuum Productions Bandcamp page here