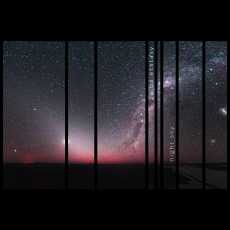 1 A Blue Gradient 9:14
2 Perseids 4:02
3 Cosmic Waves 5:20
4 Weightless 23:25
5 Gravity 5:56
Alba Ecstasy Music (DDL 47:58) ***½
(Ambient experimental music)
Here is a very interesting album from Alba Ecstasy. An album which shows all the paradoxes of EM. “Night Sky” was nominated for the best album of 2015 for the prestigious Schallwelle Electronic Music Awards. Such a selection lets glimpse the possibility of an album of EM with a harmonious side or driven by contagious rhythms. And nevertheless, nothing of that! Without having the absolute certainty, “Night Sky” seems more to me to be an exercise which aims at making a kind of link between the equipments and the technology of today to the fragrances of yesterday. It’s an album rather difficult to tame and which will please certainly to the fans of Klaus Schulze and these strange atmospheres of convoluted tones of the 70’s.
And that begins with “A Blue Gradient“! A dark wave rises over the dusty ambiences, like these ancient cornets which announced an imminent danger in the era of the myths and the legends of the countries of Tolkien. A synth gets loose from it in order to blow melodies tinted of jazz of which roll in loops between the volutes of these slow dying oscillations of the opening. Some nervous percussions are shaking the intro around the 2 minutes, diving the other 7 minutes of “A Blue Gradient” into a kind of circular spasmodic trance where one has the feeling that a long skeleton of Anaconda is sucked up towards the bottom. That gives a gyrating ambient rhythm where we shake up our bones under these threatening drones which smother the transparency of the frayed sequences and of which the jerky movements are deeply oscillating in a minimalist membrane which could continue its hypnotic hold for still some long minutes. “Perseids” proposes a purely electronic rhythm with a wild dance of oscillations which wave frantically their undulatory waves under the multiple cracklings of the drummed percussions. We can dance if we want, although I imagine here a choreography more in the very modern and avant-gardist kind, to make our joints and kneecaps swirling on this lively and spasmodic figure of rhythm where the absent choirs are as much discreet as the cracklings of Perseids. The waves are more mind-blowing in the very somber and vampiric “Cosmic Waves” which tries to resuscitate a heavy and ambient rhythm between the industrial gyrating drones and these very vaporous synth lines which are perfumed by the ether fragrances of Klaus Schulze. And came “Weightless” and its long intro forged in a wall of woosh and of reverberating drones. We are in the dry lands of Totem with these waves which expire such as those of old accordions, before being propelled behind the fires of a space shuttle which has difficulty in making its way in a shower of meteorites. It’s a long intro of 7 minutes before that a twangy synth line spreads flavors of ether which root even more the perception to hear lost segments of Totem or Blackdance. A figure of rhythm hatches out between these ambient drones a little after the 9th minute. Its fragile approach adopts marvelously the fury of the dusty winds of “Weightless“. It’s a delicately stroboscopic approach, like a very long line of a thousand meters that we shake and whom the slow waves faint at the end. As here after the point of the 9 minutes when “Weightless” cements its stillness in a storm of woosh and of wiish where from extricates a thick cloud of butterflies. Their wings fly lightly and sparkle in the storm of winds in order to dance with the delicate beatings on a xylophone, structuring an ambient rhythmic which goes along the tears of a solitary synth which seems lost in this heavy fog of ether that is this immense mass of “Weightless”. For fans of Schulze, era Blackdance and Picture Music! “Gravity” sounds really out of the woods here with its lively rhythm which waves in the most translucent layers that we hear in “Night Sky”. It’s a short jewel of analog rhythms and ambiences from the vintage years. Ambiences which encircle this surprising journey in time from Alba Ecstasy which also explains doubtless this surprising nomination, deserved I guess for the sound search and the boldness, at the Schallwelle Electronic Music Awards of 2015.